I want to create a sketch on a plane rotated around an axis and at a certain distance (normal to the sketch plane) from the origin.
Rotating is a dodle: 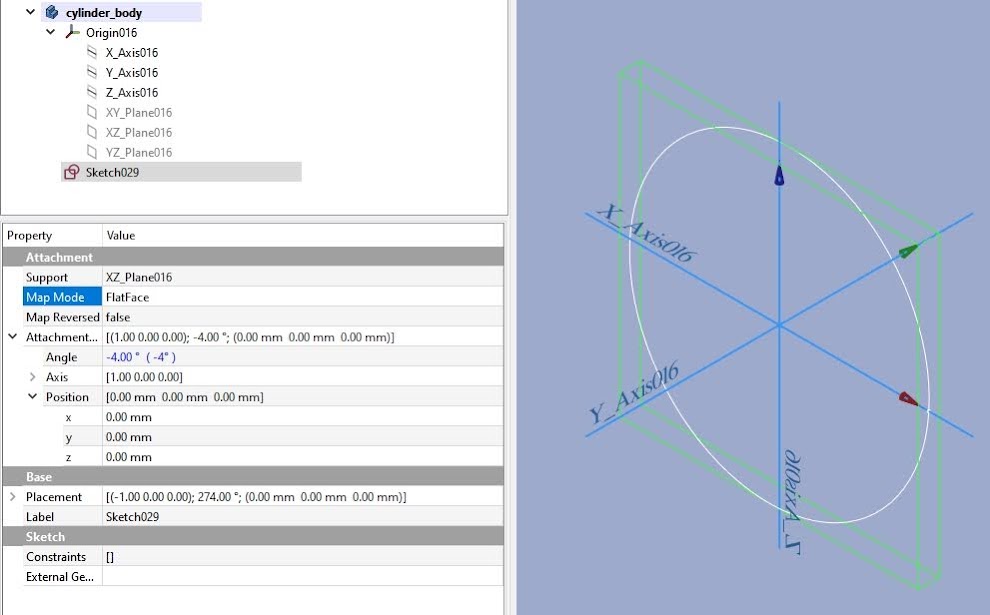 but how do I shift it a distance I want? (along the line normal to the sketch plane)
I don't want to enter value for Y and Z, but simply value of hypotenuse of this triangle, giving me a distance from rotated face.

I am sure it is again me

not seeing the obvious answer...

Maybe this will help? 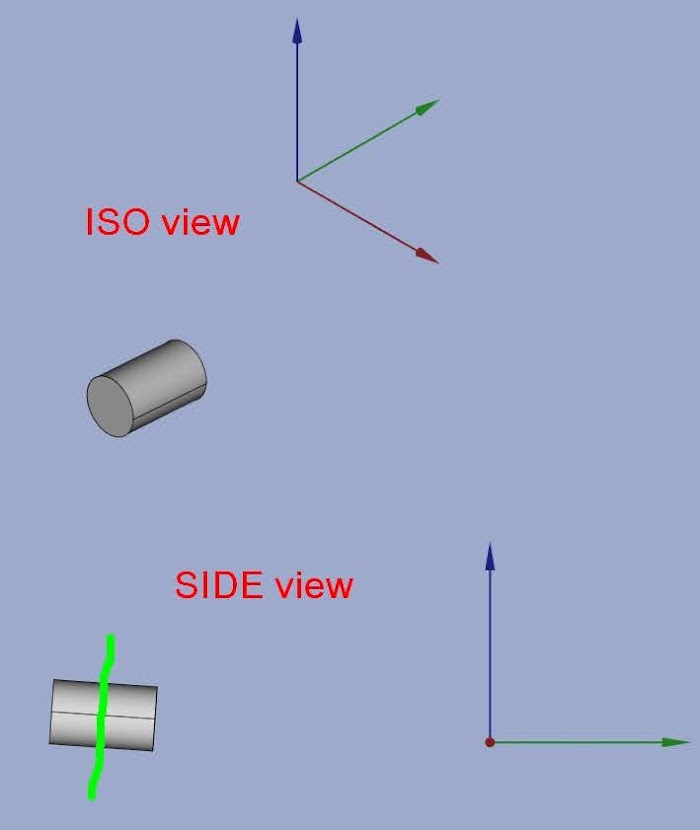 Sketch plane is along the green line (sorry for shaky hand).
So I have already rotated it (by 4 deg) and now need to shift it a distance from origin at this angle (not along Z or Y).

As you can see, I can "cheat" to create the round solid, but this doesn't work for what I want to do

There is a lot more to this design, than this cylinder, but it should help to visualise?
Top

This is actually quite trivial. The sketch moves in its own coordinate system. Therefore a pure z-move should work. (If I understand what you want.

possibly not?
If you look at my original post and attached screen dump, you will see that rotating the sketch attachment doesn't rotate sketches coordinate system (i.e. Z_Axis016 remains perfectly vertical despite sketch plane being rotated by 4 deg)

GeneFC wrote: ↑
Wed Oct 21, 2020 4:52 pm
This is actually quite trivial. The sketch moves in its own coordinate system. Therefore a pure z-move should work...

That's what I was hoping for...
but it doesn't quite work for me

However... it is entirely possible I am doing something wrong TheMarkster wrote: ↑
Wed Oct 21, 2020 7:26 pm
One way is to make a sketch with a line segment in it to be used as the reference, and then attach the sketch with the circle for the pad to that line segment...

Hey, TheMarkster !
you definitely understood what I wanted to achieve

Thank you - that looks very good suggestion.
I will try it tommorow morning and come back if I have any questions (but it all seem self-explanatory

OK, works perfectly fine.
The only thing I had to do differently to you, was to select "point on the edge" rather than simply "edge" to ensure that my desired new sketch plane was at the correct end of the "line segment" in the first sketch.

i.e. your attachment selection just says "Sketch:Edge1" and "Normal to Edge"
I had to use "Sketch029:Vertex2" and "Translate origin" to get it right.

It would be interesting to know how did you get your result with just "Edge" selection i.e. how does FreeCAD knows which end/vertex of selected edge/line to use?

Thank you again for your help

I neglected to mention I set the MapPathParameter from 0.0 to 1.0, which has the effect of moving the sketch to the opposite end of the edge.
My FreeCAD video series on youtube: https://www.youtube.com/c/mwganson
Top

GeneFC wrote: ↑
Wed Oct 21, 2020 4:52 pm
This is actually quite trivial. The sketch moves in its own coordinate system. Therefore a pure z-move should work. (If I understand what you want.

On first reading I agreed with Gene, was about to say the same, but now I see that you want the offset value on a vector that is not an axis, and doing the above via the sketch's offset would first offset the sketch to a position along the axis or axes set, and then rotate the sketch relative to those axes. These axes are the axes of an imaginary plane that the sketch would be attached to. So since you attached the sketch to the XZ axis, its attachment plane would have a
1) Z axis running in the direction of -y of the Body
2) Y axis running in the direction of Z of the Body
3) X axis running in the direction of X of the Body
So your sketch would first move based on offset values as explained above, it would then rotate at that new position around the attachment plane axes as above, i.e. not the Body Axes...confusingly in this case the sketch attachment plane and Body axis have the same X axis, but that is just specific to this case since it is caused by where you attached it.

But since you in effect want to first rotate the sketch and then move it relative to the sketch's new z axis...the answer is very simple..

So all you had to do in this case was attach a datum plane to XZ plane, set it's rotation offset values only, then attach your sketch to that datum plane and set the distance offset (which is now just Z axis since it is the Z axis of the datum plane and not of the Body object).

So as Gene said

Here are some screenshots and a demo file.

The cuboid is just created at Body origin to demonstrate the Body axis system, the cylinder is as Gene suggested and the prism is what you should have done.