The ProDark preference pack is in my opinion the best! And I am really thankful for @turn211 who made it but I need to make my own theme for my icon packs.
So I just took the code and I hacked my own together.

The reason I worked on it was because I can incorporate my Icon theme's into a stylesheet with linkbranch and I need it if I want to use the workbench tabs where I am working on. Realthunder added some code that it would make it possible to replace the complete tab of the workbench with custom icons.
I also was a bit annoyed about the amount of space was lost by padding in the icons, screenspace I rather use for something usefull.
When I was done I compared it with no stylesheet, and it was pretty much the same. So I kinda just removed the padding on the icons.

I also did some minor tweaks like changing light gray to white on some places and minimizing the fold out icon space. And making the tabs a bit more clear from active to inactive. And the scrollbars are bit darker. Also red outline on the tooltip, which was totally an accident but I kinda like it now.
Below shot from Linkstage with my custom icons:

I was thinking about calling it ExtremeProDark so people know it is like ProDark but more EXTREME. Maybe someone can make the lite version the S version and the light version too

.
I have added the zip file but I have not tested it at all, so use at own risk.

My Twitter My Icon theme for Linkstage
Please support Freecad so we can make it even bigger and better!
Top

I have put my files on a git, if it was up to me it can be added too the addons manager.
I am not really sure why the other [preference packs don't include the stylesheet. Maybe because it is in the main repro? I also included the overlay theme that is for Linkstage. Not sure if this is an issue?
Link:
https://github.com/MisterMakerNL/ExtremeProDark
My Twitter My Icon theme for Linkstage
Please support Freecad so we can make it even bigger and better!
Top

I'm bit annoyed that the 2 preference packs in the addon explorer both have this bug: 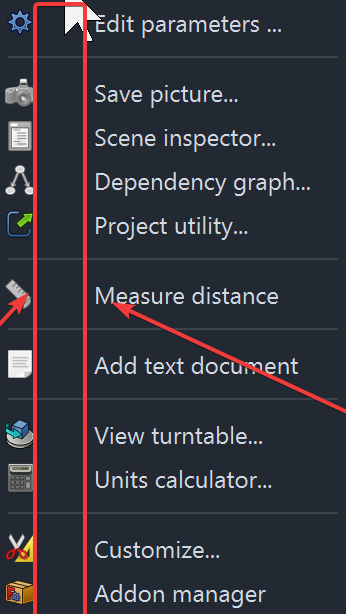 I posted a fix in the pro dark thread, but the developer has seems to left the chat.
But also the behave dark has this.
It totally screws up every menu.

Would be nice if someone could fix that or at least place my version with the fix in the addon browser.
My Twitter My Icon theme for Linkstage
Please support Freecad so we can make it even bigger and better!
Top

If I remember right, there is an alignment issue when you apply your 'fix' while looking at the View > ToolBars submenu also the treeview submenu. I think the problem I struggled with most was when toggle checkmarks and icons were mixed in a menu/submenu. But when you just don't define the menu padding at all everything just 'works'. Strange behavior.
Top

Those checkmarks now just replaces the icons, which is weird but the theme fix for this is breaking more than fixing.
My Twitter My Icon theme for Linkstage
Please support Freecad so we can make it even bigger and better!
Top
Post Reply
6 posts • Page 1 of 1