Have some feature requests, feedback, cool stuff to share, or want to know where FreeCAD is going? This is the place.
Forum rules
Be nice to others! Read the FreeCAD code of conduct!
Post Reply
88 posts

I don't use Flamingo, but I've read in different parts, here in the forum and the wiki, the word "Pype". I always think it's a typographical error, and it drives me crazy.

Is the spelling "Pype" correct in the context of Flamingo? Is it meant to indicate Python? As we know, in the Python world, many software modules are named to start with "Py". However, in other cases I feel it's obvious what they mean. In the case of Flamingo, I always think it's a misspelling of "Pipe".

Can you think of using a different name? It just looks wrong.
Always add the important information to your posts if you need help. Also see Tutorials and Video tutorials.
To support the documentation effort, and code development, your donation is appreciated: liberapay.com/FreeCAD.
Top

Hi @vocx,
in my slang I call pype the instance of classes defined in pipeFeatures.py. That's a shorthand to refer to those specific objects.
For clarity sake Yes, the "y" is an explicit reference to the language Python.
Top

oddtopus wrote: ↑
Sun May 26, 2019 11:26 am
in my slang I call pype the instance of classes defined in pipeFeatures.py. That's a shorthand to refer to those specific objects.

I just ask you to make this clear in the documentation because if you get enamoured with your own terminology you may forget new users don't yet understand this difference. I think most users would like to know how to build "pipes", and they don't need to worry about the implementation, using a special "pype" object or whatever. If I may suggest something I think it'd be better to call it PyPipe, or PipeComponent, or something that makes it obvious it's a generic class, and doesn't refer to the common word "pipe".
Always add the important information to your posts if you need help. Also see Tutorials and Video tutorials.
To support the documentation effort, and code development, your donation is appreciated: liberapay.com/FreeCAD.
Top

New entry for dodo: the profile editor. That's a dialog to insert few kinds of customized sections easily to use in your structures. It's compatible also with the Structure feature of the Arch workbench.
It's still "work-in progress" since the Apply button and the section of profile's position are disabled but I wish to complete the job soon.
Top

Great impressiv work. Thanks for that masterpiece. I am still playing around with it and i found out if i create a pipe on basis of a dwire, insert or attach a valve or a cap, then i move the base dwire and make a redraw with the pypelinemanage. Result: the pipe moves but all the other parts keep in the same place as before. Am i doing somthing wrong here?

also i do not find a possibility to change the diameter of the pipe after having created it.

ikua wrote: ↑
Mon Jul 08, 2019 10:42 am
... the pipe moves but all the other parts keep in the same place as before. Am i doing somthing wrong here?
also i do not find a possibility to change the diameter of the pipe after having created it.

Hi there!
It will take a while to be comfortable with difference between pypelines and pypebranches:

* pypelines are general containers, they group all the components and have a base on which to redraw the pipes under request but do not update automatically. Redrawing affects only pipes and elbows.
* pypebranches are point-to-point spools of pipes that update automatically when the base DWire or Sketch is modified, but are composed only by tubes and curves. Nothing else. Also the tubes can not be broken or moved because those changes will be lost duting next document recompute().

To make a self updating pipeline you can use several branches inside one pypeline, joined for example by one valve in the middle: you can use pyperoutes and attach-to-pype tools for that task.

I'm planning a new tutorial soon, so I will add also an example for that but I guess those already published on utube can clarify.
Last edited by oddtopus on Sun Jul 14, 2019 4:33 pm, edited 2 times in total.
Top

Little update about the profile editor: now the dialog and its features are complete and looks like this: 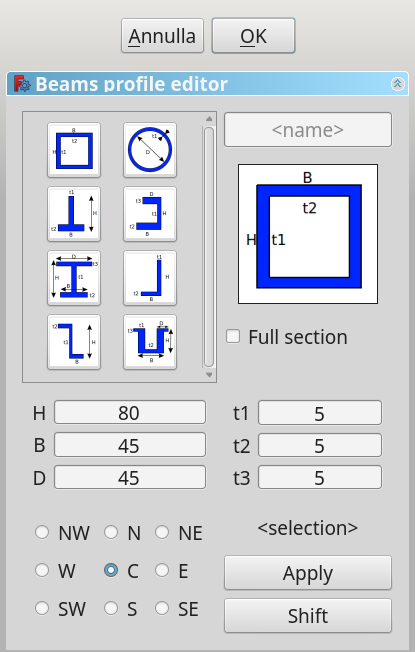 I deem the tool quite usefull in general, so I also made a standalone version (maybe not fully up-to-date) that can be used as a macro here, for those who don't want to deal with the complete WB.

Features
[*] creates 10 types of 2D profiles, that can be used with Arch's Structure objects for instance, with custom dimensions
[*] modify the dimensions of a section: select it / change dimensions / click "Apply"
[*] shifts the section shape respect to the axis of the beam: select it / choose the position with radio-buttons / click "Shift"
Top

Thank you for your answer! Still cant work it out. But i was only playing around with it, to see if i can use it yor my planing allready. Will wait for the next tutorial, cause they are also everytime really interesting.

Thanks for all your effort!
Top

Hi, I'm editing the Release notes 0.19 page. I'm including the Dodo workbench, which although wasn't developed in the 0.19 development cycle, was updated to work with Python 3 and Qt5, and got the new name "Dodo", from the older "Flamingo".

It would be nice if you could post in this thread a single image that showcases the workbench. It doesn't have to be very complex, but something that attracts potential new users. In the Release notes 0.19 page, go to "Additional workbenches" to see some images used. The Dodo workbench already has an image, however, that image is from 2018, when it was Flamingo. Maybe some options have changed, and the interface is improved, so I'd like to use a more recent image.

For example, the image used in the "CurvedShapes Workbench" is quite good, as it shows what it is intended for. The image should be big enough, like 600x400 px. Since it will be displayed at 400 px width, we don't want it to be too small and blurry.

I've considered using the images already posted in this thread by thschrader: mast support, but that image shows more the frames, rather than pipes. I would like to drive the message that Dodo is meant for both frames and pipes. In other words, the currently existing image but newer.
Always add the important information to your posts if you need help. Also see Tutorials and Video tutorials.
To support the documentation effort, and code development, your donation is appreciated: liberapay.com/FreeCAD.
Top

Can I get a project report like the one in the image?